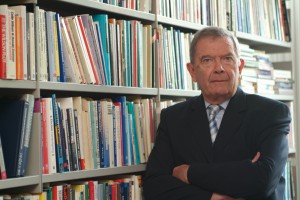 Today’s Book Advent treat is a look back at the event which kicked things off at  this year’s festival, and which turned out to be one of the most popular talks of the weekend  – Professor Anthony King’s ‘The Blunders of our Governments’.

Professor King, Millennium Professor of British Government at the University of Essex, joined us to talk about his latest book, which was co-written with Ivor Crewe. This fascinating book uncovers the scandals, botches and miscalculations made by British politicians of all parties over the last three decades, and for the book festival audience, the catalogue of errors proved infuriating and amusing in equal measure! With this being a rather turbulent time for the British political stage, Professor King certainly struck a chord with our festivalgoers!

Here’s what one member of the audience had to say about the book:

“Anthony King draws on his encyclopaedic knowledge of the world of politics to reveal some recurring reasons for the political failures that we all love to moan about. His insightful analysis and easy to listen to wit made the talk enjoyable even though much of the subject matter describes how our leaders manage to let billions escape their grasp time after time.  The book would make a great read even if you only wanted to reinforce what you already thought about the political classes.” 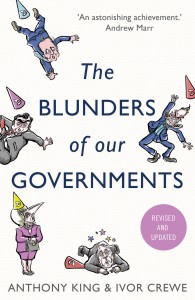