We’re delighted to announce that author, editor and crime fiction expert Martin Edwards will be joining us for an event at our 2016 festival! To celebrate festival volunteer, Kelly Turner is here to tell you all about Silent Nights a collection of Christmassy crime short stories that Martin has edited… 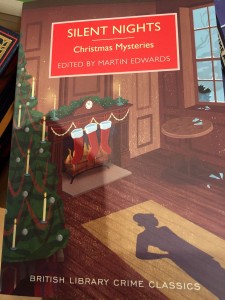 It makes sense that so many ghost and crime stories are set against the backdrop of Christmas. The fear, suspense and tension provide a perfect juxtaposition to the warmth and safety that Christmas should afford. In this spirit, Martin Edwards has edited a collection of Christmas based crime short stories which has been published by the British Library.

The collection itself may be new, but the stories themselves are not. Authors such as Sir Arthur Conan Doyle, Dorothy L Sayers and GK Chesterton feature. There were many names I admit I had not come across before, such as HC Bailey, of whom I learnt Agatha Christie was a big fan, and Margery Allingham. Helpfully Edwards includes a small introduction to each author before their story. The result is akin to a Christmas stocking: more and more treats are discovered the further you delve in.

With the majority of authors included in the collection members of The Detection Club (of which Edwards is the current president) the writing is definitely of a different style to that of the modern day. It is a great introduction to some of the great crime writers of the late 19th and early 20th centuries.

One of my personal favourites was ‘Waxworks’ by Ethel Lina White. Sonia, a female journalist chooses to stay the night in a waxwork museum where three separate people have lost their lives: one murdered and two through natural causes. There is a wonderful build up of tension and the fear is palpable. Flashbacks to her life outside of the museum and the misogyny she suffers makes the story wonderfully rounded.

Martin Edwards himself is a man of many talents. With a law degree to his name, he trained as a solicitor and now works as a consultant for a law firm. He is also a crime writer in his own right: the author of the popular Harry Devlin and Lake District crime series. Something of an authority when it comes to crime writing he is a member of the Murder Squad collective of the Crime Writers Association and has written The Golden Age of Murder. It goes without saying that we are very excited that he will be coming to Felixstowe Book Festival in 2016. We will have no shortage of questions for him!