This week we’ve decided to highlight festival writers who put women and the collective experience of womanhood, at the forefront of their work.

On the 8th of March, we celebrated International Women’s Day. In the same week, women across Britain mourned the murder of Sarah Everard, which triggered an outpouring of personal experiences of what it is to be a woman on the streets of Britain today. We shared stories of times when we had felt unsafe, threatened, vulnerable, on account of our gender. It is easy to assume that we have long escaped the shackles of gender inequality, but the reality is, we still have a long way to go. Many of the writers attending this year’s Felixstowe Book Festival explore female perspectives in their work; be it historical commentaries on women and society, or intriguing tales of female friendship, courage and desire. So, here is the lowdown on some of the fantastic female writers we have coming to the festival this year, along with their empowering female-led narratives.

Esther Freud’s new novel I Couldn’t Love You More spans three generations of women. It is a story about mothers and daughters, wives and muses. We leap from the Swinging 60’s to 90’s

London, to the present day, and within these three different narratives, Freud explores female relationships and addresses some of the fundamental complexities of human life. I am very excited to get my hands on this when it is released in May! Esther Freud will be chatting to Catherine Larner about her latest novel as part of the festival on the 26th of June at 11:30 am, at the Orwell Hotel.

Jojo Moyes’s The Giver of Stars is another tale of remarkable women. Inspired by a true story, Moye

s’s novel takes us to the 1930’s, to a remote area of Kentucky, where five women fight to spread the wonder and joy of reading, becoming the ‘packhorse librarians’. Celebrating the power of and wonder of the written word, Moyes’s novel is a mesmerising tale of female friendship, reminding us of the strength that a collective sisterhood can yield. Jojo Moyes will be discussing The Giver of Stars and all things writing with Ruth Dugdall, at The Orwell Hotel on Saturday 26th June at 1:30 pm.

Female narratives aren’t only put to the forefront in fiction at this year’s festival. Double Lives; A History of Working Motherhood, is a groundbreaking social history of working motherhood over the past 180 years. Stooped in meticulous historical research, Helen McCarthy puts working mothers, their feelings and their lives, at the forefront of her commentary, offering us a take on modern Britain which challenges the ways we think about gender and equality. To find out more about this fascinating take on Britain’s social landscape, be sure to tune in to our live-streamed event on Sunday 27th June at 1:30 pm, where Helen McCarthy will be interviewed by Rachel Sloane as part of our series of online events.

Juliet Nicolson brings us Frostquake, another unusual take on our changing social landscape. On Boxing Day 1962, a 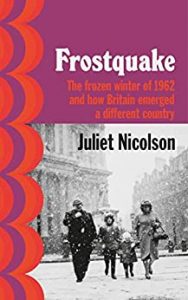 heavy snowfall greeted Britain, one that would proceed to last for the next 10 weeks. Out of the ‘Big Freeze’ that saw food rationed, power cuts and burst pipes, the privileged London elite making use of their ski equipment, a new Britain emerged. With Frostquake Nicolson argues that acting as a catalyst for change, the thaw led to a melting of traditional British values. The following Spring, new life was unleashed, bringing with it social change, including newfound freedoms for women. The Beatles topped the charts becoming a symbol of youth and counterculture, the Profuomo scandal exposed racial and sexual prejudice, and Mary Quant brought out a range of clothes that encouraged women to dress for themselves. Cleverly combining personal memoir with a zoomed out social and historical commentary, Nicoson paints a vivid landscape of 60’s Britain. Catch our live-streamed interview with Juliet Nicolson                                                on the 26th of June at 6 pm.

We can’t wait to welcome these brilliant writers to the 2021 festival for what promise to be thought provoking and insightful discussions. Please do get involved!

Elizabeth and the Festival Team x