To celebrate our 10th festival we are running a special blog series, Bookish Best. 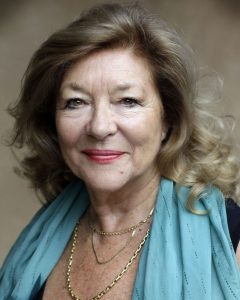 We are asking some of our 2022 speakers a series of bookish questions to give our festival fans some insight into the literary lives of our festival guests. We are delighted to be kicking off with the lovely Carol Drinkwater.

What has been your favourite read of the past 10 years?
I think the book that has most haunted me over the last ten years and has drawn me back to two re-readings of it in five years is Ondaatje’s The English Patient, which I first read when it was shortlisted for (and then won) the Booker Prize in 1992. in 2018 Ondaatje was awarded the Golden Man Booker prize for the novel. This second award encouraged me to re-read the novel along with several others on that list. I also decided when re-reading it for the second time to watch Minghella’s film again and compare the two, the choices made for the film. As I work in both worlds – film and publishing – it was a very gratifying exercise.
I read the novel for a third time last year. It really is one of those books, stories, that gets richer with each encounter. The film is more romantic, the book grittier in my opinion though both are remarkable.
What is the best independent bookshop that you have visited in the past 10 years?
I am a great fan of the award-winning White Rose bookshop in Thirsk. I have been invited there on several occasions to do events, signings and I always have a wonderful time. Of course, Thirsk is where the late Alf Wight better known as James Herriot lived and worked. So, I do have a strong attachment to the area and I am always made welcome.
Having said that, as I don’t live in the UK I feel I am missing out on many indie bookshops. If I lived in Britain I could jump in my car, head off in all directions and pop into the bookshops, say hello, meet the booksellers who are such an important part of our industry.
Who is your favourite author who has come to prominence in the last 10 years?
In the last couple of years I have discovered the Australia writer, Shirley Hazzard. I have known of her for a very long while but I have never actually settled to read her books before. I don’t know why it has taken me so long. She is marvellous. Her prose is so elegant, eloquent and her descriptions of Italy in novels such as Bay of Noon are very evocative. Her characters, their dilemmas and emotions really linger long after the last page has been turned.
If you are asking me about a writer who has more recently been published then I think I will choose Sally Rooney. I love her work, I love her descriptions of Ireland, of the younger Irish generation. She writes so lucidly of their encounters with sex, religion and modern Irish mores.

Wow, plenty of bookish inspiration from Carol here and many thanks to Carol for an excellent contribution. We’re really looking forward to seeing her on the 26th of June at Harvest House and you can find out more information about the event here: https://felixstowebookfestival.co.uk/events/carol-drinkwater-in-conversation-with-rachel-sloane
Keep your eyes peeled for more Bookish Best instalments tomorrow!