We hope that Bookish Best is giving you plenty of inspiration for books to read, bookshops to visit and events to attend at FbF 2022. Our next blog guest is Alexander Larman who shares with us his bookish best bits of the past ten years…

The best book I’ve read in the past 10 years is an oldie but a goodie, Augustus Carp Esq. You know from the subtitle onwards – ‘being the autobiography of a really good man’ – of the kind of book that you’re in for, and th 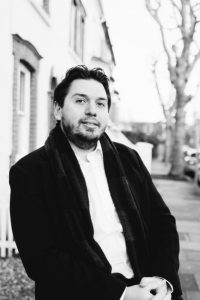 is pitch-perfect satire on Victorian religious hypocrisy really ought to be far better known than it is. An amusing fact is that it was published anonymously, and the author was revealed to be the physician Henry Howarth Basford – honorary physician to George VI. I have no idea what he was like as a doctor, but as a comic novelist he was peerless.

What is the best independent bookshop that you have visited in the past 10 years?
The best bookshop I’ve visited in the past 10 years is Blackwells in Oxford, my home city. A wonderful place with fantastic staff, an endless assortment of brilliant books and one of the best antiquarian sections anywhere in the country. And as a bonus, it might still have signed copies of my books lurking somewhere.
Who is your favourite author who has come to prominence in the last 10 years?
The best author I’ve discovered in the past 10 years is Anthony Quinn. A film critic turned novelist, his addictive and brilliant books range in genre from romance to espionage to state-of-the-nation, but always with a mixture of wit, heart and brilliant writing. He should by rights be better known – but the forthcoming film of his best-known novel, Curtain Call, should change that.

What an inspiring series of bookish recollections. Alex will be joining us as part of our Three Generations of Royalty –  A Royal Event in the Year of the Queen’s Platinum Jubilee event alongside Frances Dimond and Jane Ridley. You can find out more about this fascinating event here: https://felixstowebookfestival.co.uk/events/three-generations-of-royalty-a-royal-event-in-the-year-of-the-queens-platinum-jubilee
Bookish best,
The Felixstowe Book Festival Team