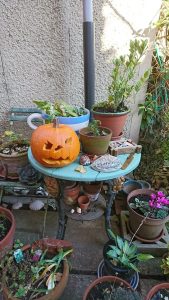 October the 31st has arrived. Across the nation pumpkins will be carved, bonfires lit and sweets distributed to small visiting witches and wizards and other such spooky folk.

According to folklore, Halloween is the night where the barrier between the supernatural world and the land of the living is at its thinnest – we are closer to those who have shuffled off this mortal coil than ever before. Make of that what you will… but either way it’s a nice excuse to light a fire and indulge in some Autumn themed treats (my current favourite ingredient is pumpkin, it’s so delicious). It is also a wonderful reason to share some spine-tingling stories. For centuries at this time of year people have gathered together to ward off the Autumn darkness and to tell a ghoulish story or two. Feast your eyes below for some hauntingly good recommendations…

The Turn of the Screw by Henry James

What goes unexplained is the most frightening thing in this jewel of a tale. Who actually is Peter Quint and what dreadful thing has he done? Was it even him who committed such an act in the first place, or someone smaller and seemingly more innocent?

The Little Stranger by Sarah Waters

If you enjoy post-war tales of old families, dilapidated houses and things that go bump in the night, this is the novel for you. An unnerving story of repression, class and the repercussions of being made an outsider, The Little Stranger keeps you guessing until the very end and looking over your shoulder for a very long time after that.

For those who prefer a good old fashioned Gothic tale, exploring fears over scientific the scientific innovations and the decadence of the Victorian age. Lots of thick city smog, gas lamps and grotesqueness – terrific.