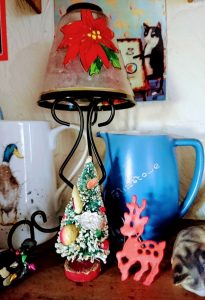 The 11th advent door holds a much loved festive tune, paired with a poignant message thanks to Mike, newcomer to the festival.

‘Let’s face it, the real hero of the festive period isn’t Santa Claus, it’s Rudolph the Red Nosed Reindeer. Without that slightly mutated young buck jumping to the rescue on that ever so foggy Christmas Eve, Santa could have been lynched. In essence, Rudolph single hoofedly saves Christmas. And that is why this song is still so beloved today despite being written over eighty years ago. It appeals to that very British love of the underdog, one that overcomes adversity, comes to recognise his true potential and achieves greatness.

What’s not to love about this heartening tale? Apart from the faint possibility that Santa is an exploitative tyrant who only uses Rudolph to further his own ends, not much. Even today the merry tune contains quite a few moralising and meaningful lessons. Namely, that it is wrong to judge others based on their differences. For those who are bullied, teased and treated like outcasts for being considered weird, dorky or a loser is sadly still too often an occurrence for many children. A prime example is the recent footage on social media of a fifteen year old Syrian refugee being water boarded by another pupil at a school in Huddersfield. The boy’s left wrist is already encased in a plaster cast, the result of a previous attack. Clearly, there is a need for both children and adults to learn the value of showing kindness to others. This message hasn’t been lost. Indeed, over £130,000 has been raised for the Syrian boy by the general public since the assault. We should not overlook the simplicity of this Christmas fable in showing us the nastiness of bigotry and prejudice and the import of embracing diversity.’

Christmas is certainly a time to reflect on the year that has passed and what we can do to make the next one better.