I hope you are feeling suitably festive as we draw closer and closer to Christmas day! Today’s musical choice comes from our wond 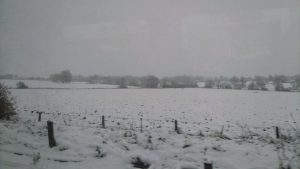 erful committee member Jez, who recalls a tune from her childhood Christmases, ‘In Dulce Jubilo’.

‘The hymn I have chosen is In Dulce Jubilo.  It was my favourite when I was at school and I still can’t resist joining in when I hear it sung. I think I liked the mixture of English and Latin – I loved Latin (which my friends thought was very strange) – and it has a lovely alto line, which makes wonderful harmonies.  Like other advent carollers, I always prefer singing the alto or descant where possible.

In Dulce Jubilo is one of the oldest carols, with original words in a mixture of mediaeval German and Latin, written around 1328.  The melody first appeared in a manuscript held in the Leipzig University Library around 1400, and became publically known in hymnals around 1533.  The tune spread throughout Europe, and English words were added in place of the original German.  During the nineteenth century it was arranged in four voice parts, and one of the most popular versions sung today is based on Robert Lucas Pearsall’s 1837 composition.  There are several variations on the English lyrics – Katherine Jenkins sings one very similar to the one I remember from school.

In Dulce Jubilo is the second most popular choral Christmas carol among cathedral organists and choirmasters.  I was listening to Saturday Live  on Radio 4 the other morning, and Prue Leith, who was one of the guests, said that it was her favourite as did an expert on ancient carols.  It starts as a celebration of the baby Jesus in the manger, and on his mother’s knee, develops through his sacrifice and a plea for him to take us with him, to a description of the angels singing and bells ringing in heaven:

In any place but there

There are angels singing

And there the bells are ringing

Oh that we were there.

The music starts quite simply but ornamentation is added until that last verse which goes all out with complex harmonies and trills.

When I hear this carol, I am transported back to St Nicholas Church in Harwich in the 1950/60s.  Our headmaster was very keen on choral singing (if you were good at singing and/or games, you were guaranteed an easier life!)  We always had a carol service at St Nicholas which included bits from Handel’s Messiah, (And the Glory of the Lord, with the altos leading – our moment of glory!) and other great choral works, and always including In Dulce Jubilo.  In those days, churches were not adequately heated, if at all, and St Nicholas was so high that any heat disappeared into the roof.  In the choir, we were not allowed to wear jumpers or cardigans over our pristine white blouses, and so against the cold we wore layer upon layer underneath, ending up looking like rows of little Michelin men!  Despite the difficulty of breathing deeply enough to sing under those restrictions, it was a night I always looked forward to and remember with fondness.  So when the Nine Lessons and Carols from Kings College is broadcast on Christmas Eve, I shall be singing along to In Dulce Jubilo, and other carols, and though in the warm and without the layers, that old magic will return.’

I think Jez has really captured here the effect that Christmas music has on you, transporting us back to the songs and carols we sang as children. My heart is thoroughly warmed now!