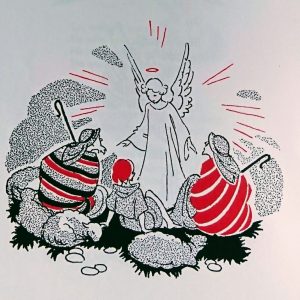 Christmas is drawing every closer, I do hope you are still enjoying our festival Advent calendar. I mentioned in a previous post of mine the timeless memory of childhood Christmas plays, complete with tinsel halos floating above small heads, cotton wool beards adorning little Father Christmases and the strapping of tea towels around the heads of tiny shepherds. This brought me to my choice for today, ‘While Shepherd’s Watched Their Flocks by Night’, a carol depicting the scene of the Annunciation of the Shepherds. The words of this carol first appeared in 1700 in The New Version of the Psalms of David and at that point was the only hymn that was authorised to be sung by the Anglican Church. Since then variants of this tune developed in various counties, notably Cornwall, South Yorkshire and Derbyshire.

This dramatic scene of humble shepherds and their flock descended upon by a heavenly being is one of the most exciting in the Christmas story. It captures the awe, fear and anticipation of the night of Christmas Eve itself, whilst also emphasising the message that even the most lowly can play a significant role in such a significant event.

In our family (and I imagine in many others) we have a series of our own variations on this carol. Whilst not wishing to desecrate such a beautiful tune and lyrics, I feel that at Christmas it is important to have a good laugh. Thanks to a version which came from my Grandad, the laughs follow thick and fast.

‘While Shepherds washed their socks by night

The Angel of the Lord came down and switched to BBC!’

As an employee of a certain broadcasting establishment, he did not limit his enthusiasm to the workplace and as a result this ‘version’ of While Shepherds Watched is a firm family favourite. I hope this has put a smile on your face as much as it does every year on mine!