Welcome to the Winter Solstice, the shortest day of the year! As of tomorrow, bit by bit the days will start getting lighter. In this Pagan spirit, festival volunteer and visitor Elizabeth has chosen ‘The Holly and the Ivy’ as the carol behind Advent door number 21.

Of all the trees that are in the wood, the holly bears the crown! 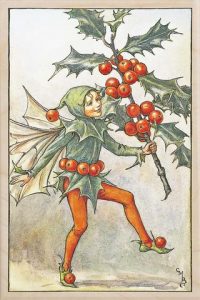 ‘It still remains a mystery to me why, out of all the dressing up costumes a little girl could have, that at the age of 5 I expressed a wish to have my own Holly Fairy outfit. I can only conclude that it was the hours spent looking at the posters of Cicely Mary Barker’s ‘Flower Fairies’ that adorned my sister and mine’s bedroom wall, which ignited my desire to embody this particularly cheeky looking fairy. Little did I realise that such an outfit did not exist in high street stores but, fortunately for me, my mum had a talented friend who was able to make an exact replica – complete with wings, a cute hat and berries. The outfit was gleefully worn (along with bright red tights) to many a Christmas party at the local tennis club, until it was too small and was passed down to my little sister -much to my dismay.

In many ways it seems strange that it should be this dangerously sharp and unconventional looking plant which has become symbolic of Christmas festivities. Holly as a festive symbol, to be used on cards and decorations is a Victorian invention. However, its association with Christmas goes back to Pagan times, in which holly was seen as a symbol of fertility, and was hung in houses on Christmas Eve to ward off spirits and bad omens. Interestingly holly has also often been seen as a male plant, alongside the feminine ivy, a representation I am glad my 5-year-old self rejected! In Christian tradition, the Holly is said to represent Christ’s crown of thorns, and the red berries his blood. Despite the various symbols that the plant has, for me, a sprig of holly and red berries (along with its partner Ivy, which mustn’t be forgotten!) are representative of the joy that nature can bring us at this time of year. I remember my Nanan decorating her small and cosy home with sprigs of holly from the garden on the days building up to Christmas. The merry tune of the traditional folk song ‘The Holly and the Ivy’ certainly approves of this sentiment, and the lyrics conjure up many wonderful images of the outside world – in which I can imagine many holly fairies are dancing, alongside the running deer and the rising sun…’

What a joyful image to conclude with, perhaps giving some inspiration to future generations of small people entranced by the Holly fairy?

All the very merry best, until tomorrow! x