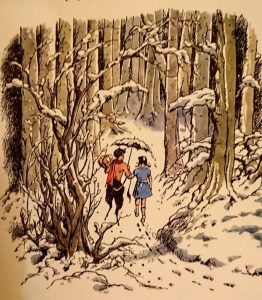 Behind Advent door number four, we bring you a story which, whilst not necessarily classed as a piece of Christmas literature, certainly has its festive associations. The Lion, the Witch and the Wardrobe, the first tale in The Chronicles of Narnia, tells the story of the four Pevensie siblings, Lucy, Peter, Susan and Edmund.

Evacuated from London during the Second World War, they find their new home in the gloomy old house of a mostly absent Professor and his austere landlady. During a game of hide and seek Lucy, the youngest sibling, settles upon a wardrobe in the spare room, in which she conceals herself from her siblings. Determined not to be found, she moves further and further into the wardrobe until she unexpectedly sets foot on… snow.

Into the land of Narnia we go, and at this point C. S. Lewis transformed the imaginations of children for generations to come. I think we all harbour a secret desire to be able to disappear, have an adventure and even live a life with the possibility of being able to return from our adventurous place as though nothing has changed – and C. S. Lewis gave us the gift of the opportunity to be able to imagine such a scenario.

The Narnia that Lucy discovers is under the cruel rule of the infamous White Witch who has declared that in Narnia it shall be ‘always Winter and never Christmas’.She inflicts the cold and the darkness without the light and joy brought by such a festival. However, luckily for the Narnians, the arrival of Lucy and, eventually, her siblings, sparks a series of events that suggest the end of the rule of the white queen.

Quite magically, Father Christmas arrives at a point in our tale when the White Witch’s icy spell over Narnia is beginning to break. Never have I been so relieved to realise that the children are not being chased by the evil Queen but are in fact being pursued by Saint Nick.

‘He was a huge man in a bright red robe (bright as holly berries) with a hood that had fur inside it and a great white beard that fell like a foamy waterfall over his chest… Some of the pictures of Father Christmas in our world make him look only funny and jolly. But now that the children actually stood looking at him they didn’t find it quite like that. He was so big, and so glad, and so real, that they all became quite still. They felt very glad, but also solemn.’

Lewis portrays here not only the spellbinding encounter of four children with a most beloved festive spirit; he emphasises the power of the presence of Father Christmas in Narnia. He presents the children with ‘tools, not toys’, preparing them and providing hope for the momentous task ahead.

His return marks the thaw in a long cold winter, which strikes me as one of the most wonderful things about the festive season. We face dark mornings and cold nights and miserable news being reported left, right and centre. So the thought of the gladness of Father Christmas, and the bright lights and merriment of Christmas itself, are an absolute tonic.