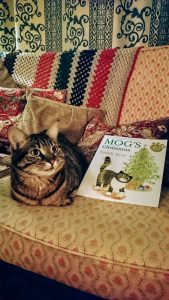 There appears to be an inadvertent feline theme to this year’s festival Advent calendar – we will try and introduce some other species into the mix at some point, but for now it seems that cats are winning the day. Which brings me to a certain literary cat whose antics usually involve her winning the day too, regardless of the mayhem that she has caused.

Mog’s Christmas begins with Mog, the family cat, not really embracing the Christmas Spirit. Everybody is busy cooking or wrapping presents. There are too many people in the house, including lots of aunts and a jolly uncle. A tree starts growing INDOORS. No one has time to play with Mog. So she retreats to the warmest spot outside of the bustling house, on the chimney pot. I’m sure many of us can relate to the fervent urge to escape from the hustle and bustle and business of the festive season for a little, much needed, peace and quiet.

An incident involving Mog and the chimney pot means that she does return to the bosum of her busy family, adding a flurry of soot to the festivities. One of the last beautiful illustrations of this beloved story shows the family enjoying simple gifts and sharing crackers, and Mog sitting contentedly, complete with turkey and her trademark boiled egg.

This image of contentment is completely in-keeping with the wholesome goodness that runs through all of the stories of the much loved and dearly missed Judith Kerr who passed away earlier this year. In Mog she captures the sweet and simple aspects of Christmas, in the gathering of families enjoying each other’s company. Even Mog – the quintessential household cat- enjoys herself in the end…

Merry wishes, until tomorrow!
Imogen and the Festival Team

P. S. Earl the cat enjoyed his second outing as a festive model very much…