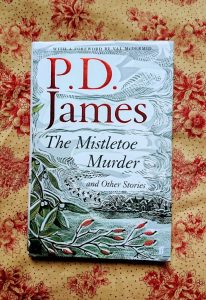 On the 7th day of Advent, we give those needing an escape from all this merriment a tale from one of our most prestigious crime writers, P. D. James. The Mistletoe Murder is a wonderfully self aware collection of four short crime stories with a festive theme threaded through each.

The eponymous The Mistletoe Murder is a richly dark tale and enough to curb anyone’s festive malaise. Our narrator is a best selling crime writer (an accolade we can easily bestow upon James herself) as she looks back on a Christmas from her deep past, in 1940. As a young war widow anticipating a lonely Christmas day, she accepts an invitation to the ‘warm house with plenty of wood fires, home cooking and good wine, peace and quiet’ offered to her by her estranged grandmother. Fellow guests include a mysterious cousin who she has not seen since she was a child and, more unexpectedly, an distant relative who adds an air of unease and poor taste to the otherwise pleasant company.

The whole scenario is deliciously noir and perfect to curl up with in front of the fire. Records are played, the snow falls from ‘a gun metal sky’, claret is decanted and a murder occurs in the library, not far from a bough of fallen mistletoe. I shall go no further as I wouldn’t want to spoil such a dark and delightful tale for its future readers…

Throughout all four stories, P. D. James is expertly aware of the conventions of her genre and both uses and challenges them to excellent effect, with exquisitely clever plot twists encased into such short works. Injustice deals a hand throughout each story in varying forms which is always thought provoking. A selection box of festive hints and grisly murder, perfect for crime fiction fans and for those who have, like many of James’s characters, simply had enough of all the festivities for one day…