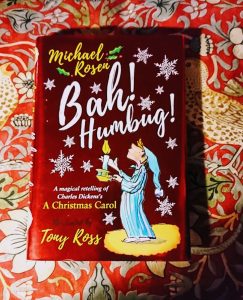 All hail the magnificent Michael Rosen who has been bringing joy, fun and a great deal of common sense into the literary world for many years. His impact on the literary diet of generations of children, from the wonderful ‘Chocolate Cake’ to the brilliant ‘We’re Going on a Bear Hunt’ and so very much more, has been immeasurable. Behind today’s Advent calendar door we are delighted to bring you a festive offering from Mr Rosen, in the form of Bah! Humbug!

‘Every Christmas needs a little Scrooge…’

Never has a statement rung more true and especially so in the case of Harry Gruber and his dad, Ray. Harry has the honour of playing Ebenezer Scrooge in his school Christmas play and it appears as though he is actually rather talented in the acting sphere. But his main concern doesn’t lie with his performance – he is most worried about making his dad proud which, it turns out, is easier said than done. Ray is a very impatient man, glued to his phone and obsessed with the success of his career, regardless of Christmas celebrations and his family’s achievements… to the extent that he leaves the performance to make an important call at the very moment when Harry is getting into his stride.

Just as Harry in his guise of Scrooge is visited by several spirits throughout the course of the play, Ray has similar experiences as he is haunted by memories of his past and realisations about his future if he doesn’t change his ways, expertly touching upon Dickensian themes of longing and regret. A wonderful read for adults and children alike, I think we have a new festive classic upon the horizon!

All the very merry best,

Imogen and the festival team x