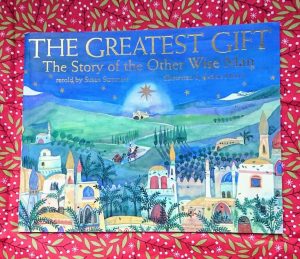 The story of the Nativity itself is of course a central tenet of the Christian belief system and provides a background that we may take for granted as we prepare for the feast of Christmas. The solid presence of the stable and its familiar occupants is so strong as both a visual and emotional aid to our Christmas celebrations.

I vividly remember a visit to Ely Cathedral just after Christmas one year, where as we entered that magnificent place we were greeted by the glorious vision of a huge illuminated Christmas tree surrounded by all the figures of the Nativity including the Wise Men who had finally made it up the aisle to join the others, the date was the 6th January, Twelfth Night, Epiphany. The Magi were in place to offer their gifts to the Christ Child. A cold bleak day was warmed and cheered for us.

The success of the lengthy journey of the three wise men is well documented biblically, and in literature, and allows our Christmas celebrations to extend over twelve days. But many writers have been inspired by the idea of a fourth traveller who also followed the star, but failed to reach the stable. What of him?

The Greatest Gift, retells the story of this fourth wise man, based on a popular account written many years before by Henry Van Dyke. We hear about Artaban, a follower of the Zoroastrian faith, for whom the study of astronomy is of great importance, friend to Caspar, Melchior and Balthazar, who sets out from Persia intent on following a most significant star with his friends, but then failing to meet up with them.

The story we read in this wonderful retelling by Susan Summer, accompanied by the most vivid and beautiful illustrations of Jackie Morris, allows us to follow Artaban as he fails to follow the star. But the reasons for his failure lead us, and him, on a different  journey that is just as true to the ageless spirit of Christmas, and to all the best actions any of us can muster, not just at this time of year.

Hankie alert, I have never made it through this story, particularly when reading aloud to small children, without a break in the voice and a bit of a tear in the eye. This is a truly heartwarming, compassion filled, thought provoking tale, to be read carefully during these times in which we live, at Christmas and beyond.

Anna and the Festival Team x