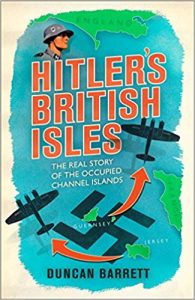 For his new book ‘Hitler’s British Isles’, Duncan Barrett interviewed more than a hundred men and women who lived through the German Occupation of the Channel Islands during WW2. By turns tragic, heroic and hilarious, their stories shine alight on what life was like for the only British population to live under the Third Reich – and offer a glimpse into our own alternate history if Hitler’s invasion of mainland Britain had gone ahead as planned.

This event is kindly sponsord by