War and the Death of News is Martin Bell’s account of fifty years of frontline reporting, and a heartfelt call to place fairness and 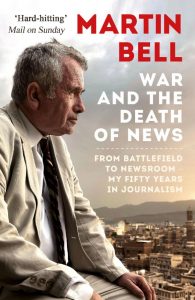 truth back at the centre of journalism. From the junior reaches of the BBC Norwich newsroom to the battlefields of Vietnam, El Salvador, Kuwait, Iraq and Bosnia, Martin Bell became the voice of foreign news, and eventually became the news himself when he was wounded by mortar fire on camera in Bosnia. After four years as an independent MP he became UNICEF Ambassador for Humanitarian Emergencies, and is currently working on behalf of UNICEF’s Yemen appeal.

Martin will be talking with Richard Walker in a pre-recorded interview.